The FBH is part of a consortium within the BMBF-funded "Innovationscampus Elektronik und Mikrosensorik Cottbus (iCampus)" )", in collaboration with the Brandenburg Technical University Cottbus-Senftenberg. The activities address a mobile low-power radar system for medical applications. They are pursued together with the Technical University Hamburg-Harburg and aim at developing a sensor concept, which is capable of measuring the vital parameters such as the pulse wave, heart tones and respiration of a patient in a contactless manner. In the past, promising results were achieved using a six-port radar system at 24 GHz. In contrast to active mixer topologies, the six-port architecture is based on an interferometric working principle and relies on power detectors to reconstruct a complex IQ-signal.

Due to the proximity of the patient with his/her unforeseen movements, recent systems, which are based on the six-port configuration with Si Schottky diodes struggle with the largely varying input signal due to their limited dynamic range. At the FBH, we develop concepts based on digital calibration and correction algorithms in order to expand the dynamic range of the systems realized so far. Adittionally, we focus on the implementation in GaN-and InP-technology, which promises higher dynamic range than e.g. Si-based diodes. 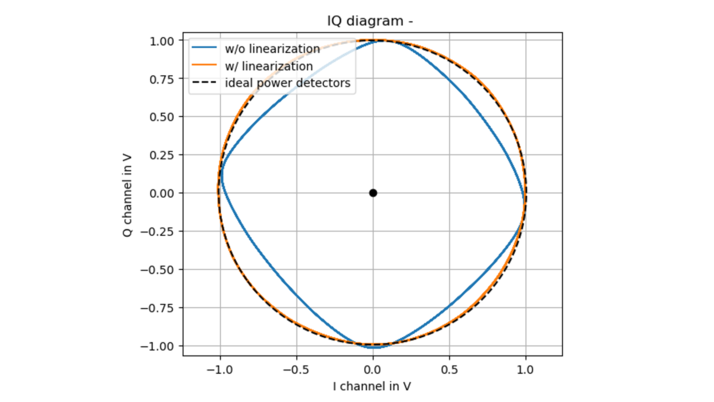 accuracy deteriorates with high input power due to the increasing deviation from the diode's square-law region such as in the case for used Si detector diodes. The phase error can be kept small by using digital linearization techniques upon initial calibration.

Demonstration of a mobile and compact radar system will be developed for cardiovascular monitoring at home. The contact-free system will be able to record cardiovascular parameters of people in need of medical care and automatically transmit these data to the treating doctor via a secure interface.

iCampµs is funded with 7.5 million euros. The joint project is part of the German Federal and State Governments’ immediate action program to support those regions affected by the withdrawal from coal in their restructuring efforts until 2038.